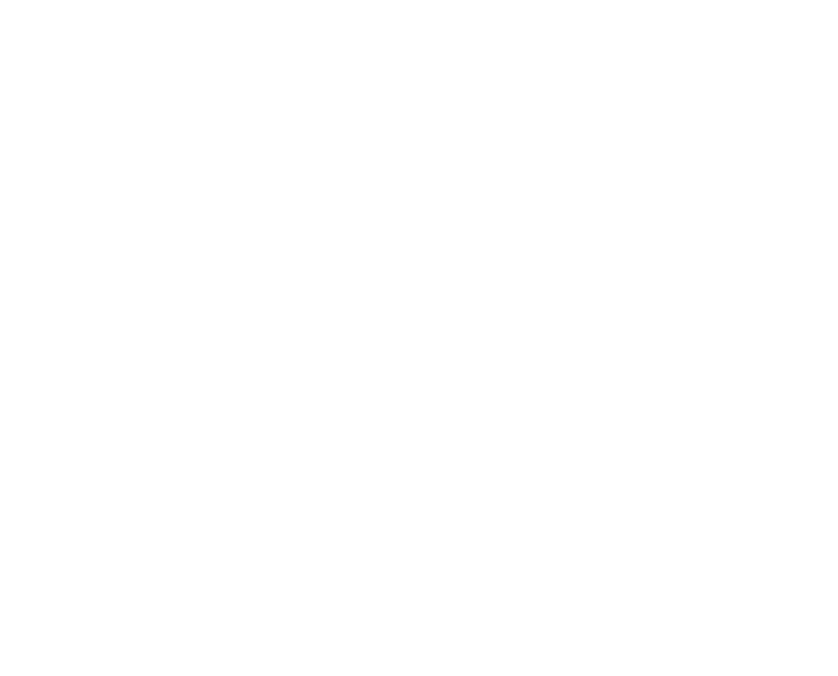 In the spring of 2019, Betaworks introduced me to a young startup that was working on something interesting – the Momentum team wanted to make giving fun and accessible to a new generation. I was intriqued. A few months later, I flew to Oakland to work with the team for a month long intensive. It was a wild ride, within the span of a month we took the app from a bare bones app to a real product.

Four months later I did a second stint with the team, this time we developed a illustration style for the app and I produced all the illustrations in the span of three weeks.

Product Design is iterative, product design is a team sport

One of the most satisfying aspects of digital product design is that it's a team sport. Great products rarely come from solitary geniuses but instead from small focused teams with the right processes in place.
‍
When I came to help Momentum I embedded myself in the team. For a period a month with moved through the product section by section, screen by screen, element by element – and by the end of my month we had something solid that we all felt good about.
‍
Below I've included some of our wireframes from the onboarding process. For a week and half we iterated on the onboarding, designing, ideating, arguing, and ultimately deflating each other's arguments by user testing the flows we built. The process of designing and testing day every two days took us from an onboarding process that many users were failing to an onboarding process that has above average completion rates. 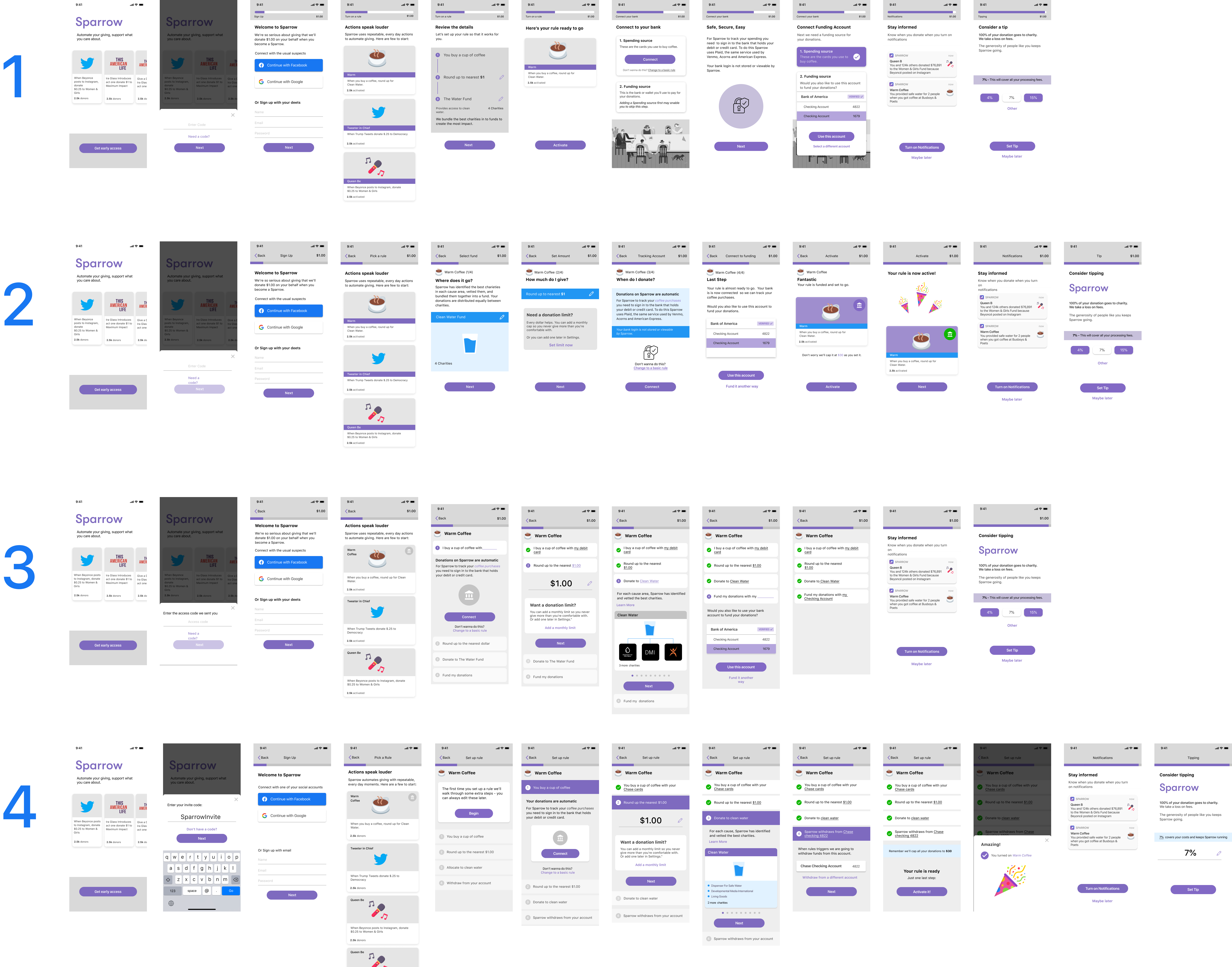 One of the important lessons that I've learned from developing products over a longer period of time, is to be okay with the product looking like crap when you're still figuring it out. It doesn't make sense to invest a ton of engineering man power in making it look and feel just right when you're still figuring out the core value proposition.
‍
That being said you will also get to a part in your process where making it look just right is absolutely essential – and what difference it makes when you do. Below you can see how much the product transformed once to HookooEekoo Team brought their magic to the table.

Give when the rule triggers

Rules trigger donations to a collection of charties. In my case, I give to clean water each time I buy a cup of coffee.

Your contributions are automatically passed on to the charities you’ve chosen and Momentum helps you understand your impact.

We had a significant challenge on our hands, the giving rules are the core of the app and each rule would have its own custom illustration. That would require a lot of drawing. They also needed to be nothing short of excellent, and time was in short supply. It would be a drawing marathon.

The first set was the most daunting, 34 in all. I only had a few days to nail down the illustration style, but a tight deadline does wonders for getting the creative juices flowing. I developed a groove of completing 6 illustrations a day for the first week. Wake up–draw, short coffee break–draw, have lunch –draw, second coffee break – draw. Rinse and repeat. 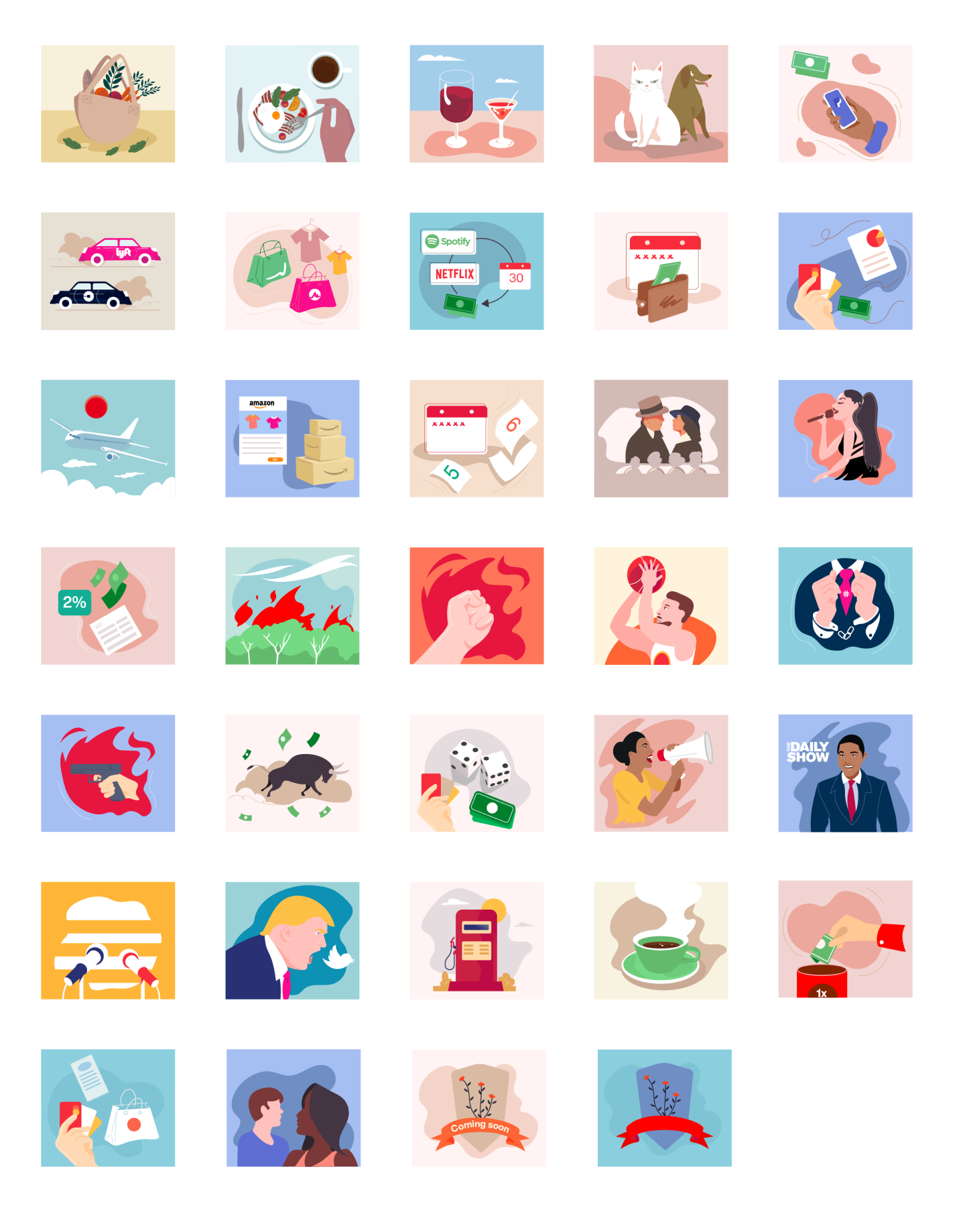 The next set was no less challenging. There were 13 collections of charities, each one would have its own editorial illustration. They also needed be distinguishable from rules at a glance. 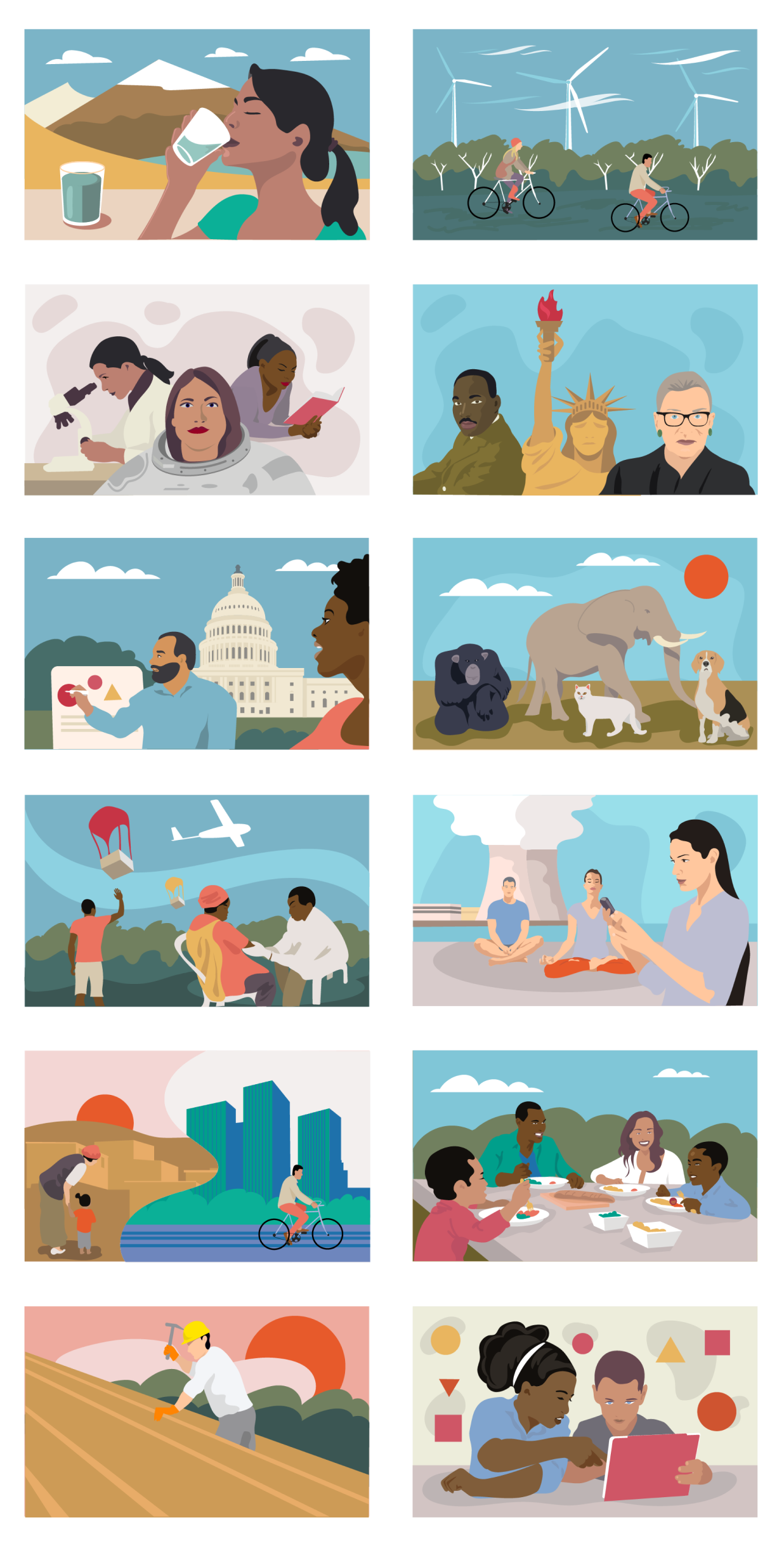 There were also lots of icons to produce. Every rule, every collection needed an icon to represent it when featured elsewhere in the app. And then there was a whole other set of icons to represent the impact that the charities were creating with their work. 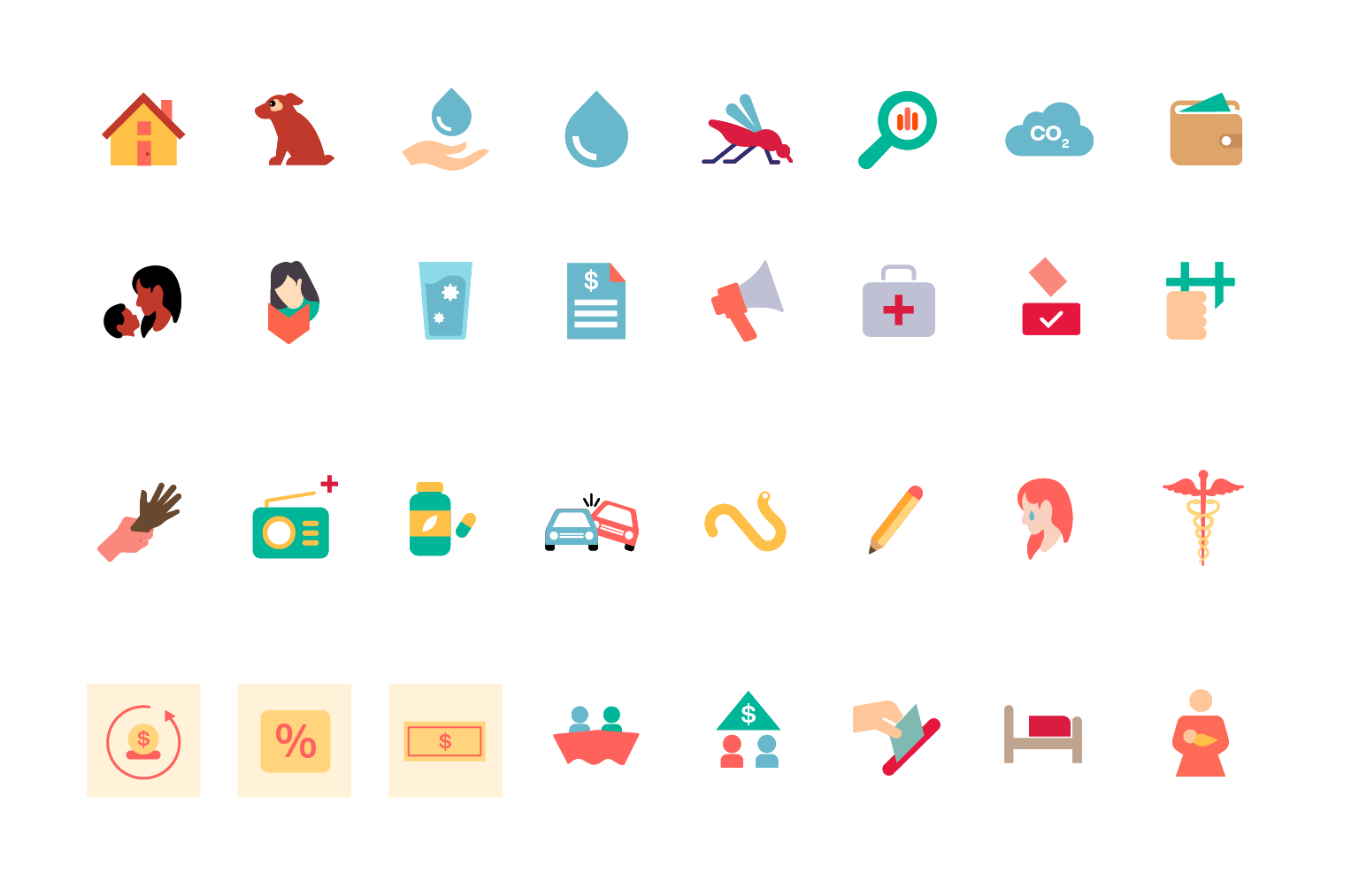 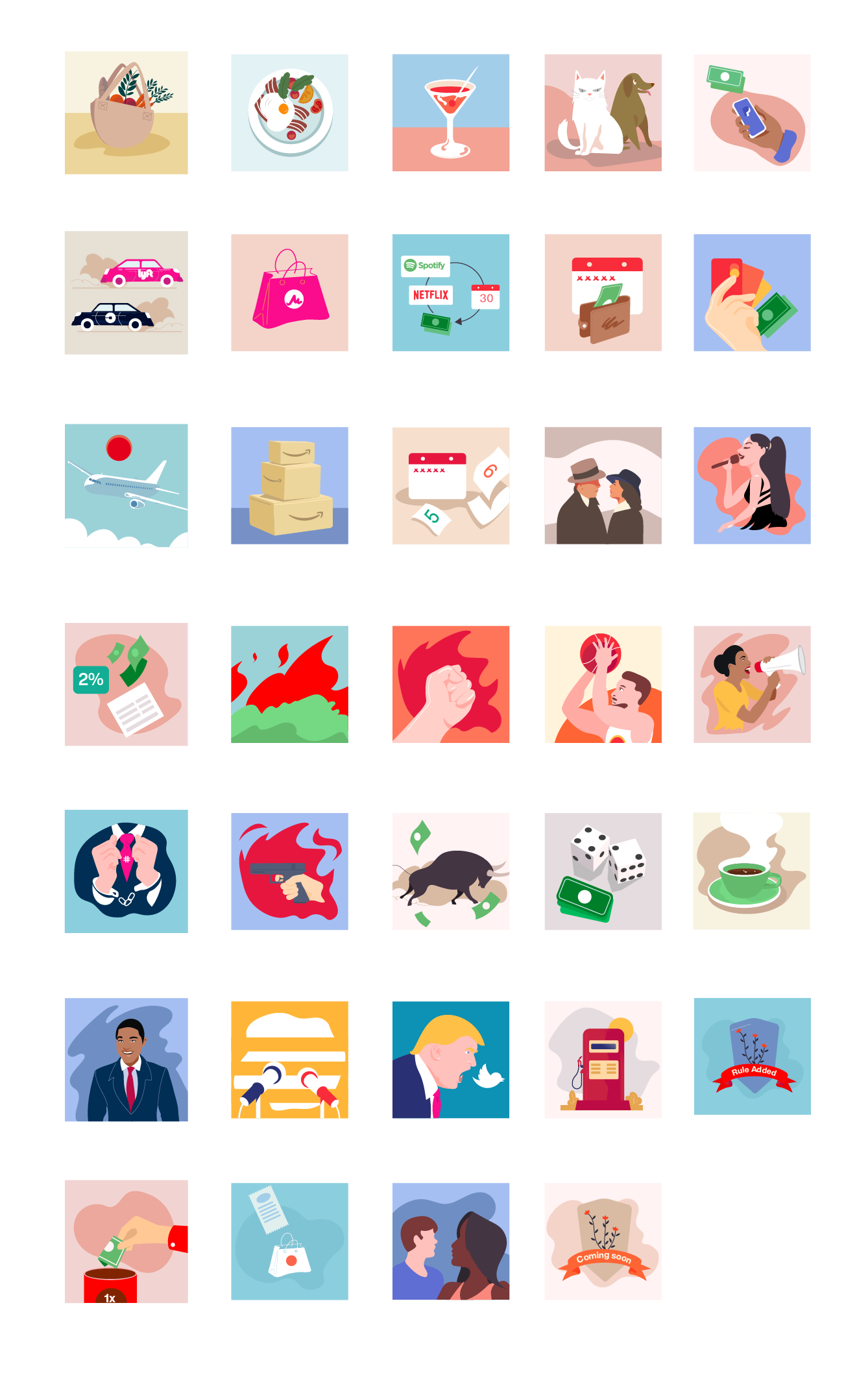